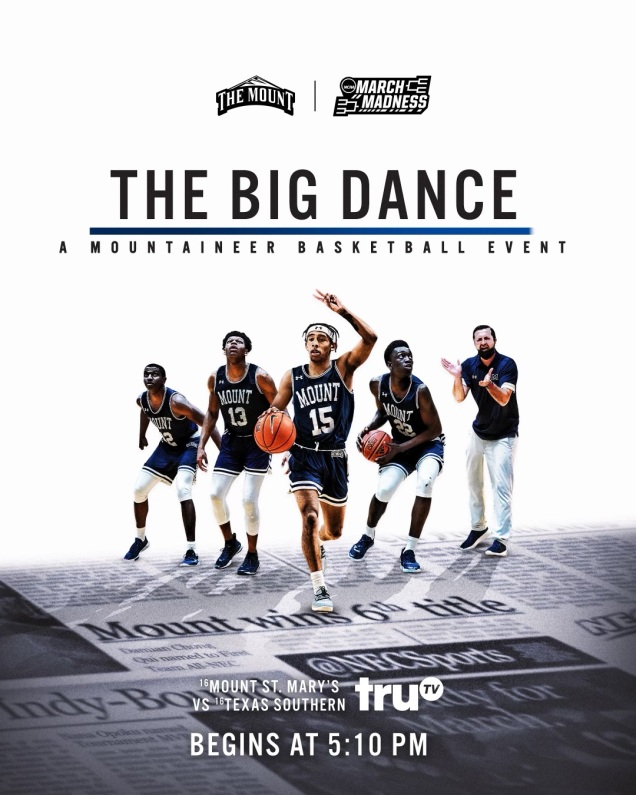 The Mount will tip off NCAA First Four action against SWAC champion Texas Southern on Thursday, March 18 at 5:10 pm ET on TruTV.

.@dc2998 took no offense at being slotted in Thursday's First Four round despite possibly meeting Michigan two days later.
“We’re here to win games,” the @MountHoops point guard said. “So whatever we need to do, we’re going to be ready and we’re going to be well prepared.” https://t.co/qmo5xLxd1l

When Damian Chong Qui joined us to talk about @MountHoops’ trip to the NCAA Tournament, he was surprised with an emotional message from his biggest fan: his dad. pic.twitter.com/c9ttyKueHn

The Day is Here!!! @MountHoops back in the NCAA Tourney!

Here’s a preview of tonight’s 5:10 pm tilt with Texas Southern. Watch on @truTV! And we pay homage to the great @JonRothstein as well.

Here are how crews are distributed, by venue, for the #FirstFour and #FirstRound. A Thread.

Mount St. Mary's takes on Texas Southern today at 5:10 p.m. in a First Four game . Damian Chong Qui: "I think this year has really helped all of us grow on and off the floor and as a family. That's more important than anything." https://t.co/ZeOWF0JSmr

Mount St. Mary's is dancing once again this year. Here's what to know about the Mount. https://t.co/ndpjyE3kkN

EDITORIAL: Deep in Frederick County’s Catoctin Mountains, tiny Emmitsburg is home to a double-Cinderella, with Mount St. Mary’s University teams in both the men’s and women’s brackets. https://t.co/hPjQdq8njj

Mount St. Mary's University men’s and women’s teams have created another milestone in its rich hoops history, as both won Northeast Conference tournaments to earn spots in their respective NCAA tournaments. https://t.co/rbOD3j0vfD

The COMPLETE 2021 seed list from the Selection Committee! #MarchMadness pic.twitter.com/n1T3oikAaQ 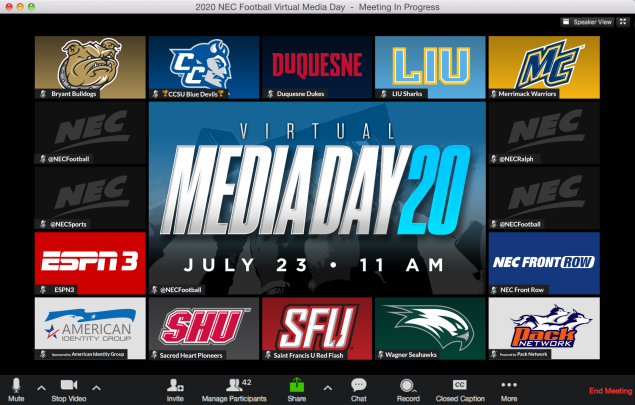 The Northeast Conference will ceremoniously kick off its 25th football season by hosting #NECFB Virtual Media Day on July 23.

Presented by American Identity Group, the on-air program kicks off at 11:00 am ET and can be seen via NEC Front Row and ESPN3.

In addition to eight head coaches, two student-athletes from every team will join the program. 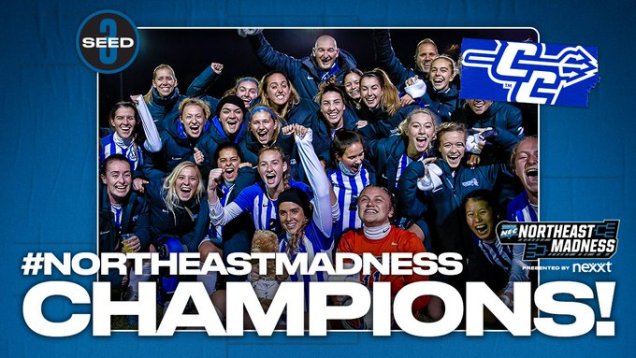 Their upset last November spawned another upset this spring.

Central Connecticut’s 2019 women’s soccer team successfully made its way through the NCAA Tournament-style #NortheastMadness Bracket (presented by Nexxt), winning the vote for “Top Postseason Performance Since 2000.”

The Blue Devils, who posted a road victory at Big Ten member Rutgers in the 2019 NCAA Women’s College Cup, pulled in 52.2 percent of the Twitter vote to edged out Fairleigh Dickinson’s men’s soccer program and its 2001 College Cup Elite 8 run. FDU led the polls for much of the voting period, but CCSU surged ahead with about two hours remaining and never looked back.

Thanks to everyone who voted for our 2019 team in #NortheastMadness . Thx to @NECsports for setting it up. Thx to Seth & 2001 @FDUKnightsMSOC for a great final. What a team! We would have preferred to be watching the @nectrack championships today but you know. Stay safe #NECpride

So sick. Then a dad in the stands bear hugged me. https://t.co/p85uUltMLF

Come on CCSU fans we gotta step up and make our presence known. We gotta vote for @CCSUSoccer https://t.co/6ZXvycEh1j

If you have a minute, please vote for FDU Mens Soccer Team for our 2001 Elite 8 performance!!! Such an epic tribe of ballers that survived the NCAA Tourney! #Survivor @FDUKnights @survivorcbs https://t.co/xwTnTAXNyy

It's close b/c it's a popularity vote and not one based on facts/performance. A win against Rutgers is significant but the @FDUKnightsMSOC were one of the best 8 teams in the country and an eyelash away from the Final 4. Should be an absolute runaway.

It was UPSET CITY on the first two days of #NortheastMadness (presented by Nexxt) voting.

Two No. 1 seeds were toppled.

First, in the Kevin Massa Region, Central Connecticut WSOC (2003) stunned No. 1 seed Bryant MLAX (2014). Up against the Bryant men’s lacrosse team that upended No. 2 Syracuse in the 2014 NCAA Tournament, the 2003 Blue Devils, who defeated Boston College for the program’s first-ever College Cup victory, pulled in nearly 56 percent of the vote.

One day later, the CCSU tweeters did it again in the Velton Jones Region. Central Connecticut BSB (2019), with a little help from the state of Arkansas, crushed No. 1 seed Robert Morris MBB (2013) by garnering more than 90 percent of the vote. Both lower-seeded teams won in this region with Sacred Heart BOWL (2019) overtaking UMBC’s Cleopatra Borel (2002).

Normalcy returned in the Danielle McEwan Region with No. 1 Fairleigh Dickinson BOWL (2010) easing past Robert Morris MBB (2014) and its NIT victory over St. John’s.

Now, the quest to identify the top postseason accomplishment since 2000 continues.

It’s time for the Region Finals with tickets to the Final Four there for the taking.

Voting will resume on Wednesday, April 29 at 2:00 pm ET on Twitter (@NECsports).

A lot can happen in twenty years.

It’s wild to think that many of today’s college freshmen were not yet born when the world overcame its Y2K fears and ushered in a new millennium.

Now that we’ve made it all the way to 2020, the time is right to celebrate the greatness of the last two decades, which basically account for half of the Northeast Conference’s history.

To that end, we are proud to sponsor Northeast Madness presented by Nexxt.

Having identified 16 unforgettable postseason performances since 2000, we will subsequently select the No. 1 postseason accomplishment through NCAA Tournament bracket-style fan voting on Twitter.

The 16 featured performances have been placed into four four-team regions and have been seeded.

Polls will open at 2:00 pm ET for an 8-hour voting period each day.

Mike Pressler’s Bulldogs went into the Carrier Dome and defeated the national No. 2 seed Orange, 10-9. Helping Bryant secure it first-ever NCAA Tournament win at the Division I level, Kevin Massa won 12 of his first 15 face-offs and Tucker James scored a game-high four goals to defeat an 11-time national champion.

Back atop the NEC, Seth Roland’s Knights posted two road wins over top-20 opponents to secure a spot in the College Cup Round of 16. FDU kicked off the run by posting a 1-nil win at Big East member St. John’s. Next, the Knights broke a 1-1 tie in the second overtime to sink A-10 member Saint Louis.

Blaire Porter spun a gem on the first day of the Amherst Regional, leading LIU past perennial northeast region superpower UMass. Sixth-inning solo homers from Bianca Mejia and Brynn Lewis were the only runs Porter would need in the 3-1 victory.

Kelly Shimmin, the 2003 NEC Player of the Year (and eventual NEC Hall of Famer), broke a scoreless tie in the 60th minute against Boston College. Keeper Ashley Ferra, who finished with 16 saves, helped preserve the 1-nil victory, which was the first-ever NCAA Tournament win by a NEC women’s soccer team. Boston College entered with the No. 13 ranking in the coaches’ national top-25 poll.

It was the night that Robert Morris conquered Big Blue Nation. John Calipari and the reigning NCAA champions visited Moon for a NIT First Round affair and the Colonials made history by knocking off the No. 1 seed, 59-57, on national TV. RMU, which led by as many as 13 points, never trailed in the second half.

After securing the program’s fourth NEC crown, and subsequently out-classing ECC champion Caldwell in the NCAA Opening Round, Sacred Heart advanced to Cleveland and found itself matched up against reigning national champion Vanderbilt in the eight-team double-elimination championship bracket. After the Pioneers and Commodores split the first two portions of the mega match, Sacred Heart posted a 4-to-1 victory in a best-of-seven baker battle to advance into the winners’ bracket.

After putting five runs on the board in a setback to No. 5 Arkansas, Central Connecticut out-slugged Pac 12 member Cal, 7-4, to remain alive in the 2019 Fayetteville Regional. CCSU outfielder Dave Matthews’ three-run bomb broke a 3-3 tie in the fifth inning and Tom Curtin earned the victory after 7.0 strong innings on the bump. It was CCSU’s first-ever win in six NCAA regional appearances.

A little more than two months before winning a bronze medal at the Rio Olympic Games, Rodney set the all-time NEC 200m record by crossing the line in 19.97 at the NCAA Outdoor East Region Championships. Earning a spot in the NCAA Championship field, Rodney finished second to LSU’s Nethaneel Mitchell-Blake at the regional meet in Jacksonville.

Central Connecticut, which opened the season with a 2-1 overtime setback at Big Ten member Rutgers, earned a second straight NEC crown and an opportunity to avenge its season-opening defeat. Riding a nine-match win streak, CCSU visited the Garden State for the NCAA Women’s College Cup First Round and played the Scarlet Knights to a scoreless draw until Erica Bardes netted the game-winner in the 89th minute.

For the second year in a row, the Colonials took down a No. 1 seed in the National Invitation Tournament. This time, RMU jumped out to a 19-2 lead over Big East member St. John’s and posted a wire-to-wire 89-78 victory in Carnesecca Arena. Karvel Anderson, the NEC Player if the Year, led all scorers with a 38-point effort that included a 9-of-15 clip from downtown and Lucky Jones added 25 points to secure the team’s 22nd win.

The Knights came within one golden goal of the NCAA College Cup Final Four with their remarkable run ending against UNC in the 126th minute. FDU kicked off tourney play with a 1-0 triple-overtime win over Boston College before notching a 2-1 regulation result against Princeton. The Knights earned a ticket to the Elite 8 with a 1-0 victory over Seton Hall. All-NEC performer Aaron Paye, who assisted on the lone goal against Seton Hall, scored goals in three of the Knights’ four NCAA Tournament matches, including two late game-winners.

After securing the NEC Tournament title as the No. 4 seed, Central Connecticut continued its Cinderella Run deep into the NCAA College Cup bracket. The Blue Devils upended No. 15 Harvard, 3-2, and proceeded to defeat No. 9 Tulsa by the same score. All-NEC forward Yan Klukowski, who provided the game-winner in the 84th minute against Harvard, scored in both victories.

In its first season of Division I postseason eligibility, Bryant opened play at the NCAA Manhattan Regional by posting a crisp 4-1 victory over SEC member Arkansas. John Mullen and Kevin Brown each had three hits apiece with the former’s RBI triple serving as the centerpiece of a three-run eight inning. Sal Lisanti threw 4.0 innings of hitless relief for the win.

Riding an eight-game win streak, Wagner took a 7-0 lead 3:41 into the game and led wire-to-wire en-route to the first-ever FCS Playoffs victory by a NEC team. The Seahawks’ defense forced five turnovers from Colgate QB Gavin McCarney, the Patriot League Offensive Player of the Year. Wagner signal caller Nick Doscher was responsible for three TD and RB Dominique Williams ran for 106 yards and a score.