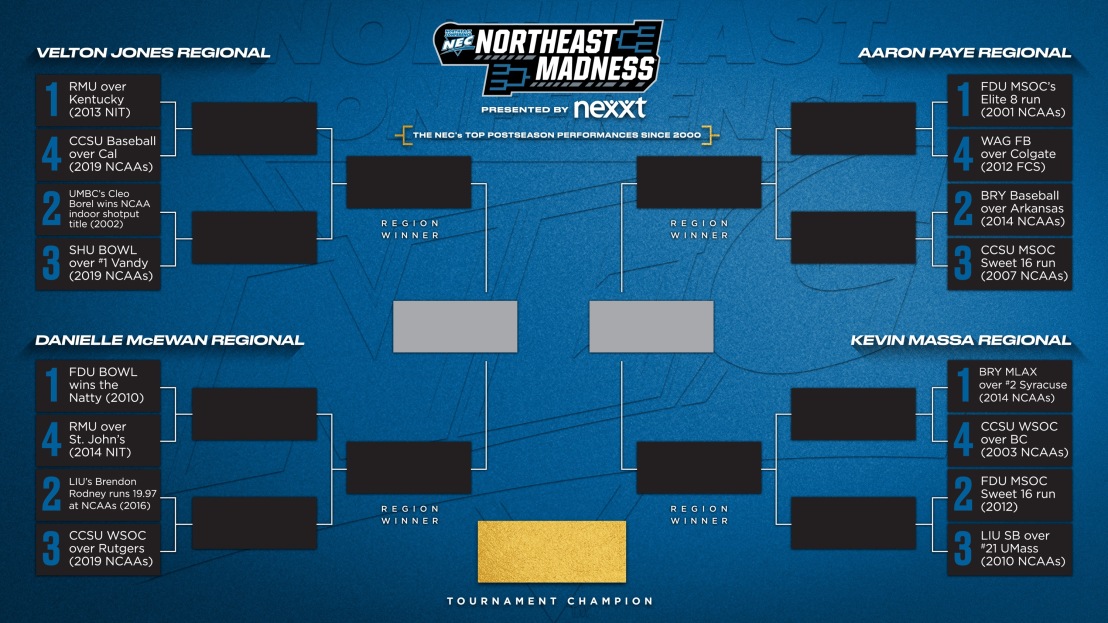 A lot can happen in twenty years.

It’s wild to think that many of today’s college freshmen were not yet born when the world overcame its Y2K fears and ushered in a new millennium.

Now that we’ve made it all the way to 2020, the time is right to celebrate the greatness of the last two decades, which basically account for half of the Northeast Conference’s history.

To that end, we are proud to sponsor Northeast Madness presented by Nexxt.

Having identified 16 unforgettable postseason performances since 2000, we will subsequently select the No. 1 postseason accomplishment through NCAA Tournament bracket-style fan voting on Twitter.

The 16 featured performances have been placed into four four-team regions and have been seeded.

Polls will open at 2:00 pm ET for an 8-hour voting period each day.

Mike Pressler’s Bulldogs went into the Carrier Dome and defeated the national No. 2 seed Orange, 10-9. Helping Bryant secure it first-ever NCAA Tournament win at the Division I level, Kevin Massa won 12 of his first 15 face-offs and Tucker James scored a game-high four goals to defeat an 11-time national champion.

Back atop the NEC, Seth Roland’s Knights posted two road wins over top-20 opponents to secure a spot in the College Cup Round of 16. FDU kicked off the run by posting a 1-nil win at Big East member St. John’s. Next, the Knights broke a 1-1 tie in the second overtime to sink A-10 member Saint Louis.

Blaire Porter spun a gem on the first day of the Amherst Regional, leading LIU past perennial northeast region superpower UMass. Sixth-inning solo homers from Bianca Mejia and Brynn Lewis were the only runs Porter would need in the 3-1 victory.

Kelly Shimmin, the 2003 NEC Player of the Year (and eventual NEC Hall of Famer), broke a scoreless tie in the 60th minute against Boston College. Keeper Ashley Ferra, who finished with 16 saves, helped preserve the 1-nil victory, which was the first-ever NCAA Tournament win by a NEC women’s soccer team. Boston College entered with the No. 13 ranking in the coaches’ national top-25 poll.

It was the night that Robert Morris conquered Big Blue Nation. John Calipari and the reigning NCAA champions visited Moon for a NIT First Round affair and the Colonials made history by knocking off the No. 1 seed, 59-57, on national TV. RMU, which led by as many as 13 points, never trailed in the second half.

After securing the program’s fourth NEC crown, and subsequently out-classing ECC champion Caldwell in the NCAA Opening Round, Sacred Heart advanced to Cleveland and found itself matched up against reigning national champion Vanderbilt in the eight-team double-elimination championship bracket. After the Pioneers and Commodores split the first two portions of the mega match, Sacred Heart posted a 4-to-1 victory in a best-of-seven baker battle to advance into the winners’ bracket.

After putting five runs on the board in a setback to No. 5 Arkansas, Central Connecticut out-slugged Pac 12 member Cal, 7-4, to remain alive in the 2019 Fayetteville Regional. CCSU outfielder Dave Matthews’ three-run bomb broke a 3-3 tie in the fifth inning and Tom Curtin earned the victory after 7.0 strong innings on the bump. It was CCSU’s first-ever win in six NCAA regional appearances.

A little more than two months before winning a bronze medal at the Rio Olympic Games, Rodney set the all-time NEC 200m record by crossing the line in 19.97 at the NCAA Outdoor East Region Championships. Earning a spot in the NCAA Championship field, Rodney finished second to LSU’s Nethaneel Mitchell-Blake at the regional meet in Jacksonville.

Central Connecticut, which opened the season with a 2-1 overtime setback at Big Ten member Rutgers, earned a second straight NEC crown and an opportunity to avenge its season-opening defeat. Riding a nine-match win streak, CCSU visited the Garden State for the NCAA Women’s College Cup First Round and played the Scarlet Knights to a scoreless draw until Erica Bardes netted the game-winner in the 89th minute.

For the second year in a row, the Colonials took down a No. 1 seed in the National Invitation Tournament. This time, RMU jumped out to a 19-2 lead over Big East member St. John’s and posted a wire-to-wire 89-78 victory in Carnesecca Arena. Karvel Anderson, the NEC Player if the Year, led all scorers with a 38-point effort that included a 9-of-15 clip from downtown and Lucky Jones added 25 points to secure the team’s 22nd win.

The Knights came within one golden goal of the NCAA College Cup Final Four with their remarkable run ending against UNC in the 126th minute. FDU kicked off tourney play with a 1-0 triple-overtime win over Boston College before notching a 2-1 regulation result against Princeton. The Knights earned a ticket to the Elite 8 with a 1-0 victory over Seton Hall. All-NEC performer Aaron Paye, who assisted on the lone goal against Seton Hall, scored goals in three of the Knights’ four NCAA Tournament matches, including two late game-winners.

After securing the NEC Tournament title as the No. 4 seed, Central Connecticut continued its Cinderella Run deep into the NCAA College Cup bracket. The Blue Devils upended No. 15 Harvard, 3-2, and proceeded to defeat No. 9 Tulsa by the same score. All-NEC forward Yan Klukowski, who provided the game-winner in the 84th minute against Harvard, scored in both victories.

In its first season of Division I postseason eligibility, Bryant opened play at the NCAA Manhattan Regional by posting a crisp 4-1 victory over SEC member Arkansas. John Mullen and Kevin Brown each had three hits apiece with the former’s RBI triple serving as the centerpiece of a three-run eight inning. Sal Lisanti threw 4.0 innings of hitless relief for the win.

Riding an eight-game win streak, Wagner took a 7-0 lead 3:41 into the game and led wire-to-wire en-route to the first-ever FCS Playoffs victory by a NEC team. The Seahawks’ defense forced five turnovers from Colgate QB Gavin McCarney, the Patriot League Offensive Player of the Year. Wagner signal caller Nick Doscher was responsible for three TD and RB Dominique Williams ran for 106 yards and a score.