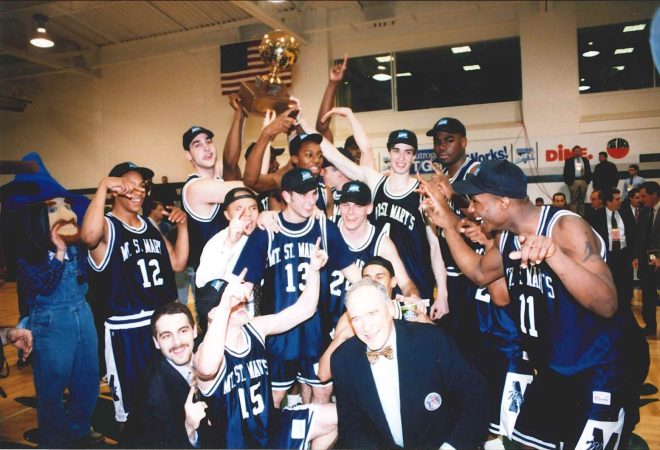 This article was featured in the 2019 NEC tournament program to celebrate, at the time, the 20-year anniversary of Mount St. Mary’s 1998-99 season.

Sometimes all it takes is a song to bust out of a slump.

Mount St. Mary’s came into the 1999 NEC tournament reeling, defeated in four of their last five games, with the latter three setbacks occurring in their friendly confines. The incoming #6 seed slumped to a 10-10 finish in the conference’s regular season – a “mediocre season” in head coach Jim Phelan’s words. On the heels of a lost campaign, expectations weren’t high as the Mountaineers entered the single elimination tournament. 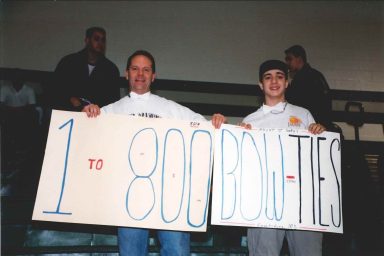 But then something happened in the tunnel of Wagner’s newly erected Spiro Center, the site for the NEC Tournament, prior to the Mount’s quarterfinal game versus #3 seeded Robert Morris.

“There was a song out that, you know, kind of had a catchy tone,” Gregory Harris, the Mountaineers’ leading scorer and passer, recalled. Harris started to sing along to the song. Then senior guard Eric Bethel joined in, and soon more teammates followed it up with singing of their own. Before they knew it, the majority of the team was making melodic noise in the tunnel.

“I remember we got really, really excited,” Harris said of the moment. “And we came out on Robert Morris with all that excitement and jumped out on (them).”

Prior to the contest, then Mount assistant coach Milan Brown recalled Phelan imploring his players to put the disappointing regular season in the rear view mirror. “I don’t know if it was the stress of them understanding the talent that we had and we should’ve been better, but I remember Coach (Phelan) talking to the guys about just going out and having fun and just playing basketball,” Brown said. 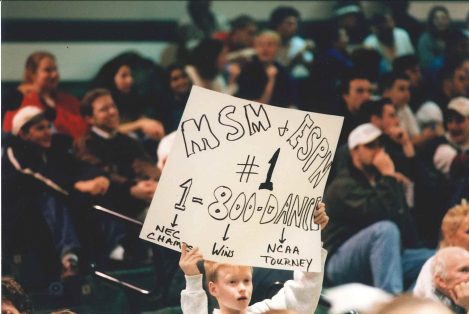 Already energized from their pre-game impromptu sing-along, the team heeded the legendary coach’s advice, coming out scorching hot against the Colonials. Harris scored the majority of his points in the first half – he finished the game with a sensational line of 19 points (on 9 shots), 9 assists and 4 rebounds – guiding the Mountaineers to a 17-point advantage at the half. The Colonials never recovered in the next 20 minutes to make it a game, losing 80-63 after the Mount held them to 35% shooting while extracting 18 turnovers.

After edging a very good 20-win St. Francis NY squad in the tournament semifinals thanks to a go-ahead driving layup by Bethel in the final moments, the Mountaineers caught a bit of a break. Their nemesis, the NEC regular season champion UMBC Retrievers, were upset in the other semifinal by a young, upstart Central Connecticut State program, coached by Howie Dickenman. The #4 seeded Blue Devils surely wouldn’t be a pushover, however, especially after their 15-win improvement compared to their prior season. They had a collection of impressive talent, led by All-NEC second teamers Rick Mickens and Charron Watson and freshman star Corsley Edwards.

It was Edwards’ post presence that provided a major challenge for NEC squads, but the Mount had an imposing figure patrolling in the paint too. That was 6-foot-10, first year center Melvin Whitaker. And Whitaker’s impact in the NEC Tournament final against Central Connecticut State may have given Dickenman nightmares soon thereafter.

“You ask me what I remember, I remember Whitaker had 8 blocks. That’s enough of a memory,” Dickenman deadpanned when asked for his recollections of the championship game that occurred approximately 20 years ago.

Whitaker’s eight rejections were pivotal in holding Edwards to just 12 points on 12 shots. “Basically Melvin was able to cancel (Edwards) out,” Brown said when describing the shot blocker’s impact that game. “He was alert; he was so active.”

Harris and Bethel had noteworthy performances in their own right, combining for 36 points, 16 rebounds and 10 assists. The three headed monster of Whitaker, Harris and Bethel, along with a stout defensive effort that held the Blue Devils to a field goal percentage of 29%, were enough to push the Mountaineers to their second ever NCAA Tournament appearance.

Harris, who currently stands second in career assists (529) and sixth in points (1,760) in Mount St. Mary’s history, deservedly was named NEC Tournament MVP. Whitaker was an All-NEC Tournament selection himself after amassing 21 rebounds and 16 blocks in the Mount’s three consecutive victories.

Moreover, the victory was the 800th of Phelan’s distinguished career and it came on the biggest stage before a nationwide audience on ESPN2. He became only the fourth coach in NCAA Division I history at the time to reach the 800-win plateau.

The sheer delight of another NCAA appearance and milestone victory didn’t mean Phelan was going to change the way he approached coaching for the first 45 years of his incredible 49-year career at the Mount, though. The family man’s level-headed nature was on display during the ceremonial net cutting after the championship game. Phelan calmly cut the final nylon strand of the net, barely raised his left fist in the air, and then just as quickly made his way down the ladder.

“Coach Phelan was the type of coach that he never really got super excited about wins and if we lost he wouldn’t let us get too down,” Harris said, further explaining that the long-time coach simply was happy for his players who realized their potential.

Picking up victory 801 would prove to be more daunting, at least during the 1998-99 season. The Mountaineers drew #1 seeded Michigan State in the first round of the NCAA tournament. Under the direction of four-year head coach Tom Izzo, a future Hall of Famer, the Spartans had just won the Big Ten Tournament after going 15-1 during the conference’s regular season. They were led by All American point guard Mateen Cleaves.

It was David versus Goliath in the truest sense, a Cinderella 16 seed versus one of the best teams in the country, but Phelan and his staff had a plan. Under the advice of Brown and his other assistants, Phelan’s game plan focused on double teaming and crowding Cleaves every opportunity they could.

“They ran their transition, it was so heavy on getting the ball to Mateen Cleaves,” Brown confirmed. “Almost 90% of the time on a made or missed basket, they threw the ball onto him to push the ball up the floor.”

The astute plan of jamming one of the nation’s best point guards allowed the Mount to hang around for 15 minutes of the opening half. Whitaker and Harris scored the team’s first 16 points and the Mount even enjoyed a 14-11 lead early. Michigan State ended up committing 19 turnovers over the course of the contest, a team high for them in that NCAA Tournament.

But the bigger and more athletic Spartans proved to be too much in the long run. The Mountaineers missed some easy shots early, and thanks to a late first half run, Michigan State pulled ahead by 14 points at the break. A 8-0 Spartan run to begin the second essentially sealed the deal, and they won going away, 76-53.

It was a sobering defeat, one you’d expect when a #16 seed challenges a #1 seed, yet the loss did little to sour anyone on the Mount’s improbable dominance through the NEC Tournament two decades ago. The Mountaineers have since been to the NCAA tournament three more times (one under Milan Brown, two under Jamion Christian), but 1999 will always hold a special place in the program’s history. It was the last time Phelan made it to the Big Dance in a decorated career that included 830 victories.

Bethel fondly recalls Phelan’s lessons of teaching his players grit, toughness and perseverance. Those teaching moments surely came in handy in the team’s magical run in the NEC tournament. “It’s not about what you bring to the table, it’s about how tough you’re willing to be, how much resolve you can have and I think our championship team was a clear example of that,” he said.

Brown wholeheartedly agrees, and jokingly doesn’t rule out that divine intervention possibly played a part in the Mount’s success that season. “Because how Coach Phelan had lived his life not just on the court but off the court and being the good Catholic man that he is, (God) definitely looked down and said ‘I’m going ahead and letting my guy get his three.’”

Whatever the reason, the 1998-99 season certainly was something the Mountaineer coaches, player and fans will never forget.

I like NEC hoops. That's why I'm here. View all posts by Ryan Peters